The Donor and the Deal

At the end of the 19th century, Charles W. Anderson envisioned a large park that would stretch from Watchung Avenue north to Bellevue Avenue. Although other landowners were not inclined to contribute property to this mission, the wealthy Anderson ultimately gave over 14 acres to become what is now Anderson Park (originally called Montclair Park). 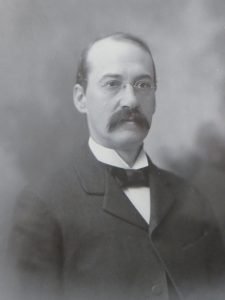 Anderson did not begin life wealthy. Born on June 18, 1847, in Philadelphia, his father was a mechanic, cabinetmaker and ship carpenter and his mother bore nine children, seven of whom made it to adulthood. When Charles was around 2 the family moved to Brooklyn, following a shipbuilding job, and four years later his father died, leaving his mother to raise her brood.

At around age 10, Charles took his first job, working as an errand boy and earning tips for shuttling parasols and bundles of their silk between Brooklyn and Manhattan. Next he delivered newspapers before breakfast and again in the afternoon. By the time he was 11, he left school for good and began working as a printer’s devil, carrying buckets of water up several flights of stairs to the presses and delivering beer to his boss. One day his hand got caught in a running press and was nearly severed.  Other jobs followed: working for a maritime news service, delivering groceries, picking raspberries and doing other farm labor, caring for an older brother wounded in the Civil War. After four years on a farm eating pork, potatoes, mush and milk, he described his transformation from “a skinny little nervous fellow” to a strapping 18-year-old who “could swing the scythe and handle the plow with any boy my age.”

His lucrative, lifelong career in insurance began after his farm experience, when he started work as a clerk for the John Hancock Life Insurance Company. He excelled there and then in 1872 joined the State Mutual Life Assurance Company of Worcester, Mass., for which he was a general agent for more than 55 years, retiring in 1924. From his Broadway office in Manhattan, he wrote life insurance policies for prominent businessmen, including three presidents of the Standard Oil Company of New Jersey. 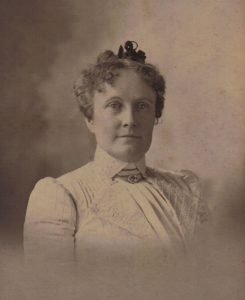 In 1870 he married Annie Maria McGuire, and the next year, with a two-week-old son, the couple moved to Montclair, settling in the former home of Joseph Van Vleck at the corner of Claremont and North Mountain Avenues. Later they built a home at 327 Upper Mountain Avenue (no longer standing).

While still working in the insurance business in New York, Anderson also had his hands in numerous other successful enterprises. He became a director of the Montclair Building and Loan Association, the Montclair Savings Bank, the Montclair Trust Company, the Y.M.C.A., the Childrens’ Home and the Fresh Air Home. He served as president of the First National Bank and as director of the Bull Steamship Company.  With his oldest child, Robert, he was also involved in the Anderson Realty Company, and the pair was instrumental in the early development of the Upper Montclair business district.  They erected the commercial building on the southwest corner of Bellevue Avenue and Valley Road (1907), the Upper Montclair post office (1918) on Bellevue Avenue, and the nearby Bellevue Theater (1922). 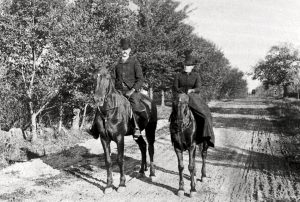 Charles and Annie Anderson were active and philanthropic in community and civic affairs.  Charles belonged to the Montclair Civic Committee of 20, which formed in 1905 to work for local civic improvement, and was involved in its predecessor organization.  He served on a committee that sought to establish a branch library in Upper Montclair, resulting in the Bellevue Avenue branch. He was also a Union Congregational Church trustee from 1896 to 1914, and was a generous donor to it, including funding an organ. He also offered $10,000 to any institution that would build a 1,000-seat auditorium in town, and the Woman’s Club of Upper Montclair accepted his challenge, constructing its clubhouse in 1923.

He was “a grand and good man” and a “very important factor” in the formation of Upper Montclair, wrote Samuel Watkins in his “Reminiscences of Montclair.”  His most important legacy was Anderson Park and his committee work toward establishing the town’s own network of parks. Anderson, who died in 1928, described his contribution of Anderson Park in a summary of his career: “I never did anything in my life that was so satisfactory to me in the way of a gift.”

His efforts to create Montclair’s first park of any significant size were underway by August 1895, when The New York Times reported his offer of future parkland to the newly created Essex County Park Commission. The Commission was getting off the ground as the nation’s first county park system. Essex County was growing rapidly after the Civil War, and urbanization and the crowded housing that came along with it raised concerns about loss of natural landscapes and threats to public health, not just in Essex County but throughout urban America. In the early 1900s the nation was experiencing tension between the 19th-century agrarian model on which the nation was founded and the 20th-century reality of growing cities and industries, a dichotomy evident in Montclair, a community making its own transition from bucolic agricultural community to railroad suburb. Progressive reformers recognized a need for playgrounds and neighborhood parks, as well as reservations that would preserve natural lands, and the emerging City Beautiful movement gained influence, spurred on by the 1893 World’s Columbian Exposition in Chicago. 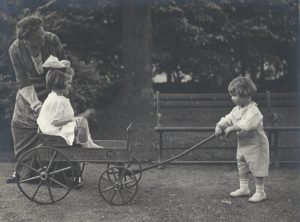 Annie Anderson Clark in Anderson Park with her children Betty and Guy Jr. around 1914. (Courtesy of Ann Anderson Evans)

The creators of the Essex County Park Commission put it this way in 1894: “It is an unquestioned fact that public parks and playgrounds are one of the most important factors in the real practical development of cities. Communion with nature is always elevating, and the good done to the overworked denizens of crowded city streets in wandering through green pastures and beside still waters is incalculable. The mind is purified, the eye is educated, the heart delighted and the tired body refreshed. Innocent pleasure and healthful exercise are combined in a pure and bracing air, and it can be truly said that a park is the heart free beating, the lungs free breathing of a great city.”

Against this backdrop, in 1894 New Jersey enabled legislation to form a study commission to consider creating a county park system. After the commission’s endorsement of that concept, the state authorized the formation of the Essex County Park Commission in 1895. That year, county voters approved the first county bond issue for buying parkland and ground was broken for the first park, Branch Brook Park. Eagle Rock Reservation came next. Frederick Law Olmsted, celebrated since his Central Park and Prospect Park masterpieces, and his son and stepson — Frederick Law Olmsted Jr. and John Charles Olmsted — designed most of what would become this vast system.

Commissioners envisioned four categories of parks: large reservations that preserved natural features; playgrounds and neighborhood parks in densely populated spots; a combination of neighborhood parks and reservations; and a parkway system linking these diverse locales via scenic roadways. Anderson Park represents the neighborhood park, surrounded as it is by a commuter train station, a commercial district and residential streets, and its value as a “beautiful breathing space” was noted by the commission.  In the original plan, it was connected to the planned parkway system, but the parkway links were never fully realized.

The ideal small playground or neighborhood park, the Olmsted Brothers believed, “ought to be places within easy reach of every mother in the city where little children under the school age can be taken to roll in the grass, and play in the sand, and fill their lungs with fresh air while the mother gets a little rest and fresh air on her own account.”

Initially, efforts to create an Upper Montclair park withered in the late 1890s while landowners at the south end of Montclair haggled with the Essex County Park Commission over land prices for tracts making up Eagle Rock Reservation. 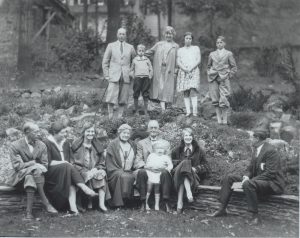 Anderson revived the effort for an Upper Montclair park with a letter to The Montclair Times in 1902 offering to donate his 14 acres. That same year, he hired Downing Vaux, the landscape architect, to design a 62-lot subdivision for the same land he was promoting as a park. Vaux’s “Study for Subdivision” for Anderson appears oddly slapdash and, with its small lots, down-market compared with Vaux projects elsewhere, suggesting that Anderson never intended to build.

Anderson may have been bluffing town and county officials, threatening a subdivision to speed up action on park plans that had been in discussion for seven years. Whatever his motive, after that the process moved quickly. John Charles Olmsted soon endorsed the property as park-worthy. But there was a catch: Montclair voters would have to approve a $1 million countywide bond appropriation before the land would become a county park. That bond appropriation passed, and in 1903 the land became one of the early tracts in the Essex County park system. Six years later, in 1909, the park’s name would be changed from Montclair Park to Anderson Park.

In a decade when President Theodore Roosevelt was turning vast stretches of wilderness out West into the nation’s first national parks, Montclair officials seemed pleased to acquire a relatively tame triangle of local parkland at no expense to town coffers. As The Montclair Times happily commented on Anderson’s offer and the county’s acceptance of it: “It will doubtless make a perpetual beauty spot of the land which this public-spirited citizen has given, and in years to come, when all the surrounding land is built upon, there will remain a space reserved for the decorative effect in an already beautiful landscape.”