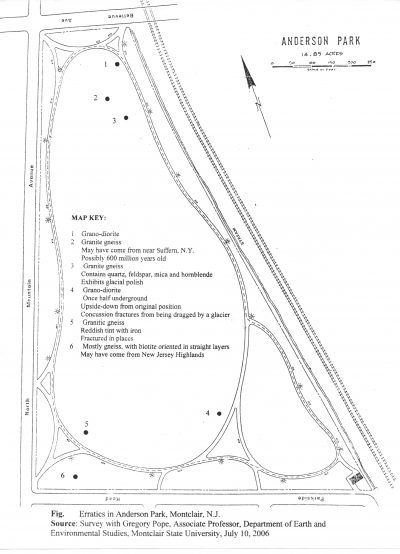 Anderson Park’s landscape spans the Ice Age to the Space Age: six boulders deposited by glaciers long ago dot the greensward, while just beyond the park’s southern end sits the boyhood home of the Apollo 11 astronaut Buzz Aldrin, “Montclair’s Man on the Moon.” These boulders are erratics, large rocks transported from their original location by glacial ice. Their surfaces have been not only weathered by the eons, but smoothed and polished while being dragged along with other stones and sediment in traveling glaciers that functioned as giant rock tumblers.

Geologically, Anderson Park is within the Piedmont Physiographic Province, where the earliest rocks are of Late Triassic and Early Jurassic age, some 230 to 190 million years old. It lies in the valley of the Watchung Mountains, just east of First Mountain, resting above a reddish-brown sediment compacted and cemented to form conglomerate, sandstone, siltstone and shale. 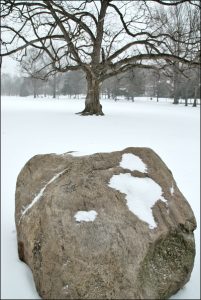 But the boulders seen today are of a more recent vintage, from the last Ice Age. During this period, enormous amounts of snow and ice formed in the Arctic. The tremendous weight and pressure of this huge mass caused the snow beneath it to solidify into glacial ice. Some 2 million years ago the Pleistocene ice sheets began their voyages from the Arctic, carrying with them soil and rocks of all sizes frozen within the ice. The most recent ice sheet, the Wisconsin, reached what is now Montclair about 20,000 years ago at the tail end of its trek. This glacial ice flowed southwesterly through what is now Montclair, passing over land that would come to include the park. As the glacier carved its path, melting ice left behind Rahway till, a jumble of clay, sand, gravel and erratics, which were mostly formed of gneiss and gray quartzite.  Now punctuating the landscape, these boulders are touchstones connecting us to a deep past.

The notion of an Ice Age was a freshly minted and revolutionary idea around the time that Frederick Law Olmsted Sr. was designing Central Park in New York City. Only as recently as 1840 had the Swiss-born naturalist and geologist Louis Agassiz theorized that a sheet of ice once covered a vast range of land, and that this ice – not the biblical flood – had deposited those incongruous boulders strewn across the modern terrain.

Agassiz’s discovery became well known – he held positions at Harvard from 1847 to 1873 – and Olmsted Sr. probably knew of it and may have therefore acquired a special interest in erratics. He definitely took the trouble to place a few in a calculated way around Central Park in Manhattan and Prospect Park in Brooklyn. In Prospect Park, for instance, Boulder Bridge is lined on both side by erratics unearthed during the park’s construction.

In Central Park near the carousel, a rounded boulder is placed atop an outcrop, looking as if it could roll off at any minute. The boulder’s placement is more apt to be the work of man than nature, write Thomas Hanley and M.M. Graff in “Rock Trails in Central Park”: “Central Park has many balanced rocks – far too many, in fact, to be natural phenomena.” Olmsted delighted in surprises, they say. “Many features of the park’s scenery are intended to inspire a sense of wonder, an appreciation of what Olmsted called ‘the childish playfulness of Nature.’ If the boulder excited astonished speculation about how it got up there, it was well worth the trouble of raising.”

John Charles Olmsted, Frederick Law Olmsted’s stepson, nephew and partner beginning in 1884, was Anderson Park’s primary creator. He viewed boulders as design elements rather than impediments to be cleared from the land; he even designed a bridge named for Agassiz that was one of several rustic boulder bridges in the Back Bay Fens of the Olmsted-designed Boston park system. 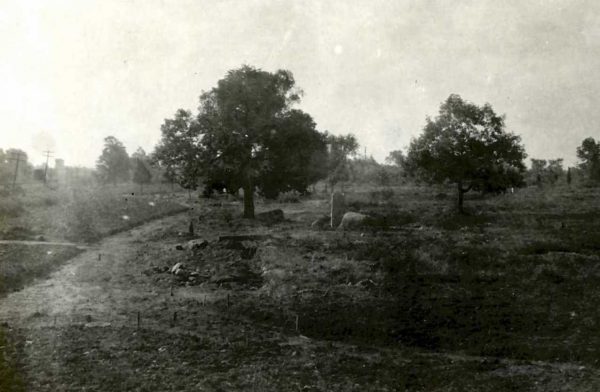 In Anderson Park erratics are prominent features. A trio of boulders greets visitors at the park’s main entrance. Photographs taken by J.C. Olmsted and his colleague James Frederick Dawson during design and construction, from 1902 to 1904, show several boulders in that general area.  They have since been artfully rearranged into a loose triangle. (Nearly three decades later one point of this triangle would become the base for a historical bronze plaque.)

Three more erratics seem strategically scattered around the southern end of the park, each close to a pathway and not interrupting the visual sweep of the meadow. Whether all six rocks were original to the site or were hauled in from nearby construction areas is unclear, but most have probably been moved at least a short distance to complement the park’s layout. During a project carried out by manual and animal labor, relocating them would have been a strenuous chore.

The effort was worth it. The rocks’ smooth, biomorphic surfaces give them a sculptural quality that is a distinctive characteristic of the park. And these ancient Ice Age artifacts act as magnets to the park’s youngest users: children clamber all over them.