On an August morning in 1902, the landscape architect John Charles Olmsted journeyed to Montclair for his first look at a dozen or so acres proposed for a park in Montclair, N.J. He came to survey the land at the behest of the Essex County Park Commission, following a request from  Montclair Township for advice on the land’s suitability for a park. One month shy of 50, Olmsted was a major figure in landscape architecture and a senior partner in Olmsted Brothers, the nation’s most prominent landscape architecture firm. 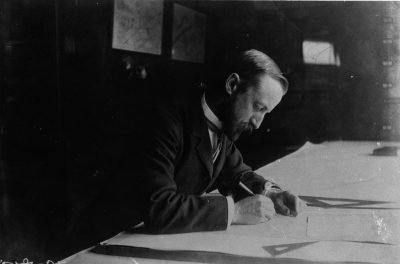 John Charles Olmsted (1852-1920) had already wielded a strong hand in major projects like the U.S. Capitol grounds, the World’s Columbian Exposition, the Boston Park System and Golden Gate Park. He was the nephew and then stepson of Frederick Law Olmsted Sr., and along with him and his younger half-brother, Frederick Law Olmsted Jr., he had a hand in numerous projects around the nation, including Essex County’s vast system of parks and reservations. 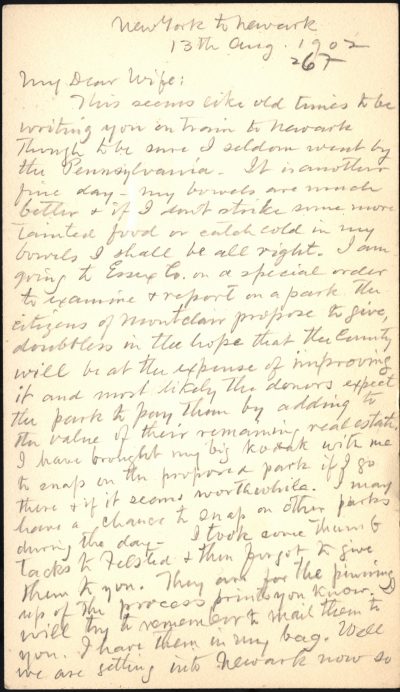 A founding member and the first president of the American Society of Landscape Architects, John Charles Olmsted attended the Sheffield Scientific School at Yale before apprenticing with his stepfather in New York. In 1898, after the retirement of their father, he and his half-brother formed the Olmsted Brothers firm. (Frederick Law Olmsted Sr. died in 1903, the year the land for Anderson Park was donated.) Their firm went on to plan park systems for cities including Atlanta, Baltimore, Boston, Hartford, Louisville, Portland, and Seattle. They also designed subdivisions (including one in Montclair’s Estate Section), grounds for private homes (including a few Montclair mansions), institutions (Montclair’s First Congregational Church among them) and even a parking lot (Bellevue Plaza, just north of the Bellevue Theater).

On that summer morning in Upper Montclair, Olmsted brought field glasses and a large Kodak camera to record the site and its views, making him perhaps the first person to document the future Anderson Park in its raw, scrappy state.

What he found when he stepped off Bellevue Avenue was a field of scrubby, shin-high brush, several swampy acres with clusters of cattails, a wooden shack used as a firehouse, and three houses. A well-worn footpath cut diagonally across the field from the nearby business district to houses scattered along Cliffside Avenue (now North Mountain Avenue) that bordered the western edge of this triangular plot. Railroad tracks ran along the east side, paralleled by Toney’s Brook, which Olmsted described as an “open ditch.” Bellevue Avenue defined the north end, and to the south the view ran as far as the eye could see, taking in a sparsely developed, tree-dotted terrain. For about an hour Olmsted looked over the land, taking pictures, sketching the placement of houses, discussing real estate conditions with his companions for this outing, a Montclair councilman and the town’s roads superintendent.

That afternoon Olmsted appeared in Newark to report “very favorably” to the Essex County Park Commission on the potential for this property, being offered for donation by Charles W. Anderson, a nearby landowner and New York City insurance salesman. It would, he reported, make a fine suburban park. 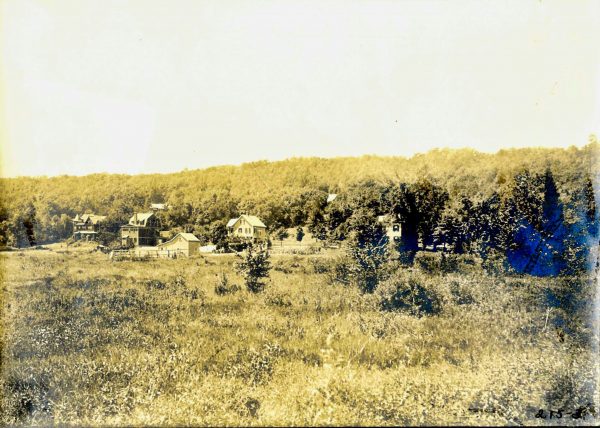