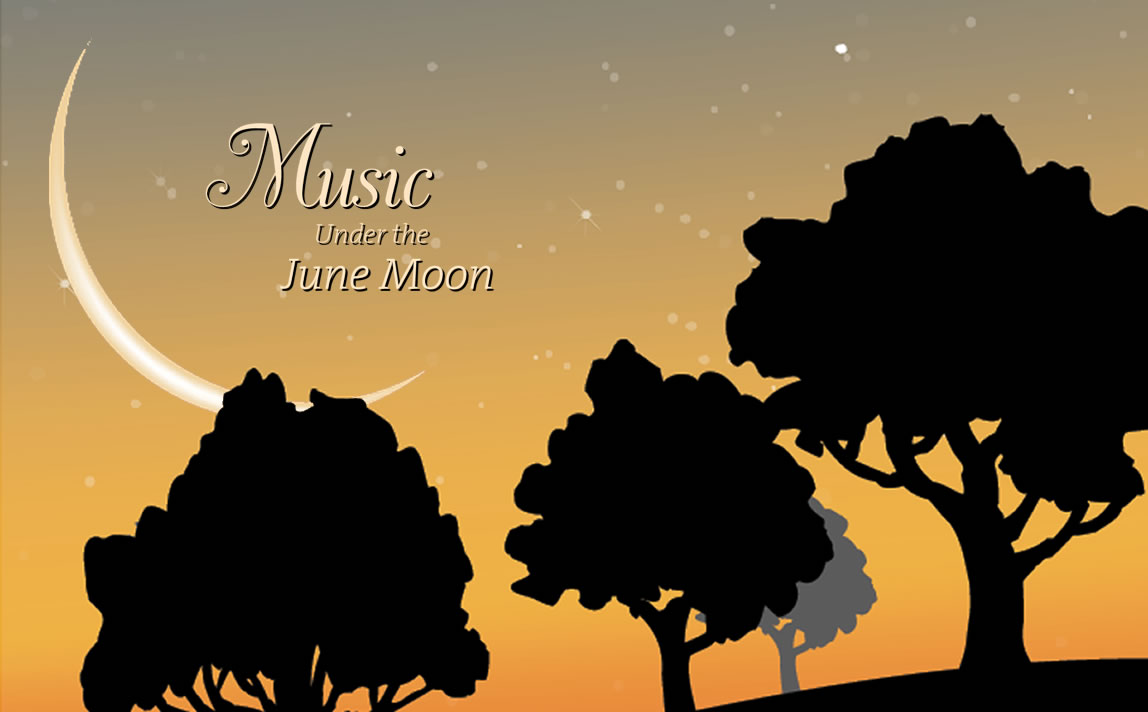 NOTE: There is rain in the forecast for Saturday, so please check our Facebook page Saturday afternoon to find out if the concert is being postponed to Sunday.

Bring a picnic and a blanket and enjoy the Chamber Music Society of North Jersey under the historic Olmsted Oak.

String Quartet No. 1, Op. 14 by Emilie Luise Friderica Mayer (1812-1883):  Mayer was born in Germany and received music training from an early age. Many of her works were performed publicly while she was alive, and she was ahead of her time travelling through Europe to her performances as a single woman. She has left behind a significant body of symphonies, chamber music, solo piano compositions, and lieder.

String Quintet No. 2, Op. 82 by Felix Mendelssohn (1809-1847):  Born in Germany to a prominent family, including his grandfather, the philosopher Moses Mendelssohn. He was recognized as a prodigy, and began studying composition as early as age 10.  Mendelssohn was in poor health late in life, exacerbated by anxiety and overwork, and died at 38 after a series of strokes.

Lucy Voin (violin) was born in Memphis, Tenn., to Ukrainian-Jewish immigrants, and began studying the violin at age 3. She was raised by musicians — her mother being a classical pianist and her father a jazz multi-instrumentalist. In 2011, she moved to New York, where she received a bachelor of music from Mannes School and studied with Aaron Rosand and Daniel Phillips. In addition to teaching privately, she is an active freelancer in and around New York City, and plays in orchestras, chamber music ensembles, churches, and weddings. She has performed in Carnegie Hall, Alice Tully Hall, Usina del Arte in Argentina, and Shanghai Conservatory Concert Hall in China. In her free time, she enjoys spending time with her family and snuggling with her two dogs.

Robert Radliff (violin) is originally from New York City, and studied violin performance at the Peabody Conservatory with Violaine Melancon. He then attained his master of arts and graduate artist diploma in performance at Montclair State University, where he studied with Weigang Li of the Shanghai Quartet.  He has been a guest soloist with numerous orchestras in Florida, New York, New Jersey, and along the East Coast, and has collaborated with Yo-Yo Ma, Itzhak Perlman, Jaime Laredo, and others. Internationally, he has performed in several chamber music settings, including at the East China Normal University, Western District Chamber Music of Hong Kong, and the Konzerte im Kirchgarten series in Hannover, Germany. He is currently concertmaster of the South Orange Symphony, performs as section violin with the New England Symphonic Ensemble at Carnegie Hall, and section violinist in the Berkshire Opera Festival in Great Barrington, Mass.  He is also founder of the chamber music series “Music in the Library” at the New Jersey Institute of Technology, where he performs with the Littman Quartet.  He teaches violin at the Cazadero Performing Arts Camp in Cazadero, Calif.; the Robert Treat Academy Charter School in Newark; and the Wharton Institute for the Performing Arts.

Jordan Fusco (viola) is an active performer, freelancer, and teacher in the North Jersey area. She has performed in a wide variety of genres, from musical theater to orchestral to pop, while maintaining a vibrant private teaching studio in northern New Jersey. A passionate chamber musician, she is co-founder of the Chamber Music Society of North Jersey. She holds a bachelor’s degree in violin and an artist diploma in viola from Montclair State University, and earned a master’s degree in viola performance from Mannes College under the tutelage of Paul Neubauer. She is a regular artist with the New Brunswick Chamber Orchestra and the APEX Ensemble.

Christine Sherlock (viola) earned her bachelor of music in viola performance in 2010 from the Cleveland Institute of Music, where she studied with Jeffrey Irvine and Lynne Ramsey, and is received her artist diploma from Montclair State University as a student of Honggang Li, violist of the Shanghai Quartet. She has also studied under include Caroline Coade, Stanley Konopka, Kirsten Doctor, and Sara Cote. Before moving to New Jersey in 2017, she performed in the Cleveland area since 2013. She was a viola section member of the Ashland Symphony Orchestra, and has also played with the Erie Chamber Orchestra, the Youngstown Symphony (assistant principal), the Warren Philharmonic, the Ohio Valley Symphony, Cleveland Opera Theatre, and Opera Circle. She has performed at festivals and competitions, including the Fischoff International Chamber Music Competition (2017), Mimir Chamber Music Festival, LAMP (Lunenburg Academy of Music Performance), and the Mendelssohn Festival in Hamburg, Germany.

Dr. Jordan Enzinger (cello) With a versatile background in solo, chamber, and orchestral music, Dr. Enzinger is a dynamic performing cellist in the New Jersey, New York City, and Philadelphia areas. He regularly performs in Carnegie Hall, Lincoln Center, and the Kimmel Center. He is a member of the cello section of the American Symphony Orchestra, and has performed with the Orchestra of St. Luke’s, New Jersey Symphony, Princeton Symphony, Princeton Festival Orchestra, and the New Brunswick Chamber Orchestra. He is also an avid teacher, and serves as cello faculty at Seton Hall University in South Orange, instructing music majors and non-majors, and at the Princeton String Academy. He is a certified cello instructor with the Suzuki Association of the Americas, and maintains his private cello studio in East Brunswick. He also is on the chamber music faculty at the American String Teachers Association (ASTA) Chamber Music Institute, and a guest lecturer for collegiate music classes at Rutgers. His students have performed in Carnegie Hall, won numerous competitions, and have received collegiate music scholarships.

Giuseppe Fusco (co-founder, CMSNJ) is a freelance woodwind doubler in the NY/NJ area.  He has held chairs in several Broadway orchestras including Rocktopia (2018), Charlie and the Chocolate Factory (2017), and Honeymoon in Vegas (2014).  He is also a four-time audition winner for the Radio City Christmas Spectacular orchestra, and has been a substitute musician for many other Broadway shows since 2012.  As a classical musician, he has performed with the Philadelphia Orchestra, New Jersey Symphony, Princeton Symphony, the Little Orchestra Society, the Greenwich Symphony, and the Colonial Symphony.  He is the co-founder of Chamber Music Society of North Jersey and has been performing chamber music recitals over the past ten years.  He is also a passionate wine lover, a Level 3 candidate for the WSET award in Wine, and is pursuing a new career as a wine professional.  He resides in West Orange with his wife, Jordan; their daughter, Sofia; and a puppy, Stanley.

Corey Goldberg is an audio professional working in broadcast radio as well as in live performance production. He is a producer, engineer, and voice artist for WBGO FM, Newark Public Radio. In addition to his technical experience, his academic background is in music, having studied at Rutgers University’s Jazz History and Research program.

Clint Edwards is a composer, arranger, and pianist. His compositions and arrangements have been performed around the world, including at Carnegie Hall, Alice Tully Hall, WQXR, Joe’s Pub, The Green Room 42, and the Eugene O’Neill Theater Conference, as well as in England, Holland, Australia, Germany, South Korea, and Poland. He won the 2019 Broadway World Award for best independent album release. As a pianist, he gives more than 350 performances a year in the NYC area and now virtually via his weekly Patreon program, “The Clint Edwards Show.” More information is at www.ClintEdwardsMusic.com and www.Patreon.com/TheClintEdwardsShow.

“Music Under the June Moon” has been made possible by funds from the Essex County Division of Cultural Affairs, a partner of the New Jersey State Council on the Arts, and by funds from the Bravitas Group/Silver Family Foundation.

Chamber Music Society of North Jersey is a non-profit performing arts organization formed in 2014 by Jordan and Giuseppe Fusco out of a passion for chamber music and a desire to bring it to the public. Its mission is simply to present quality performances of great chamber music in our region and to promote chamber music in schools.

Friends of Anderson Park is dedicated to the thoughtful stewardship of Anderson Park and to fostering its historic, natural, cultural, environmental and educational qualities. Our primary mission is to protect the spirit and integrity of the park’s nationally significant Olmsted-designed landscape and to rehabilitate and maintain its pastoral ambiance.