A Legacy Set in Stone: Plaques in the Park

Although the history of Anderson Park’s development spans more than 100 years, its more sentimental side is succinctly summarized in a mere 63 words on a bronze plaque set into a hefty boulder at the park’s northeast entrance. Other than landscape design itself, this tablet is the only piece of art in the park, and it post-dates the Olmsted period.

The inscription honors Charles W. Anderson, the land’s donor, but the memorial’s image also celebrates nature: It is bordered on both sides by a bas-relief tree whose upper boughs arch toward the center, framing the text below. At the bottom, sinuous roots create the composition’s base. The ornamentation is Naturalistic and Romantic in style, with clear Art Nouveau influences.

The plaque, 36 inches wide and 24 inches tall, is a warm tribute to Anderson’s “public-spirited generosity”:  his name, along with the park’s name, is rendered in the largest type. 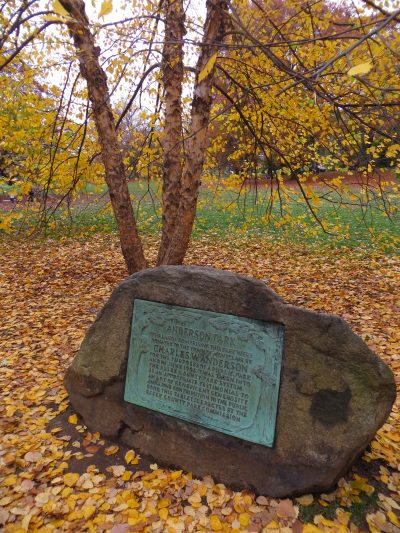 This plaque honoring Charles W. Anderson was erected in 1928.

The lands comprising this park were donated to the town of Montclair by CHARLES W. ANDERSON for the purposes of a public park and in June 1903, it was taken into the Essex County Park System. As an appropriate testimonial to an act of beneficent generosity and a fine contribution to the public good, this tablet is erected by the Essex County Park Commission.

The impetus for this marker came in January 1928, about a month before Anderson’s death, from his Montclair friend George J. Carr, who practiced law in New York.  Both men were also bankers in town in the early 1900s: Carr helped found the First National Bank of Montclair and Anderson was a director of the Montclair Trust Company.  Carr made the proposal to the Essex County Park Commission, which agreed that the gesture had “a great deal of merit” and was a fitting way to inform the public that the county was indebted to Anderson for “this beautiful breathing space.”  The tablet was dedicated on Nov. 15, 1928, in a ceremony attended by the mayor of Montclair, an Essex County freeholder, Anderson family members and interested citizens.

The plaque was cast by the General Bronze Corporation of Long Island City, N.Y., the same foundry that made the low-relief panels on the bronze doors of the U.S. Supreme Court building. Though unsigned, its designer was Maxfield H. Keck,  an architectural sculptor and model maker who lived at 19 Mendl Terrace in Montclair. He was a brother of both Charles Keck, the sculptor of the war memorial at Edgemont Park in Montclair among many other works, and  Henry Keck, a notable Arts & Crafts stained-glass designer. (A plaque of the same design as the one in Anderson Park, but with different text, is in the lobby of the Essex County Parks Administration Building on Clifton Avenue in Newark. It commemorates A.M. Reynolds, chief engineer of the park system, upon his retirement in 1931.)

The Kecks immigrated to New York City from Germany in 1882, when Maxfield Keck was a toddler, and became a prominent artistic family in the United States. The oldest son, Henry, born in 1873, was highly admired for his Arts & Crafts stained glass and the church windows made in his Syracuse studio. Charles, born in 1875, was a sculptor, who, in addition to designing the Edgemont Park statue, did much higher-profile work, including the statue of Father Francis P. Duffy in Duffy Square in Manhattan and features of the Nelson-Atkins Museum of Art in Kansas City, Mo. 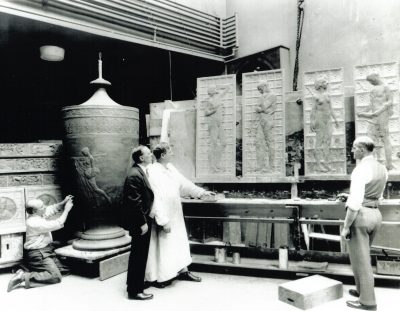 Maxfield, the youngest, born April 27, 1880, in Giessen, Hessen, Germany, designed architectural ornamentation for buildings around the country and even internationally, many of them now designated landmarks. He created decorative architectural elements and made models for architects who needed to see their concepts worked out in three dimensions. In his early years he worked for his brother Charles, and later ran his own business from a Manhattan studio. He was particularly active in the 1920s and ’30s with work that ranged from designing the monumental entranceways of public buildings to making a model for the elevator signal lights in the Abraham & Straus department store.

He is best known for designing the two gigantic Art Deco bas-relief figures, symbolizing Commerce and Transportation, that flank the entrance to the 1933 Cincinnati Union Terminal, a National Historic Landmark. Also well loved are his fanciful marine-themed terra-cotta roundels – Neptune holding a trident and dripping with seaweed, for example, and a Venetian galleon with flying pennants –  for the 1923 Childs restaurant on the Coney Island Boardwalk, a New York landmark recently renovated.

His work is also reflected in another New York City landmark, Riverside Church (1931), for which he contributed statues and reliefs of saints, angels and other decorative elements. Although most of his projects are in the United States, he is responsible for major sculptures in the Art Deco Jerusalem YMCA building, now a hotel.

He also provided sculptural decoration for the waiting room of Newark’s 1935 Art Deco temple to the railroad, Penn Station. For this landmark, he designed its 13 plaster medallions spanning the history of transportation, from the canoe to the airplane. He may also be responsible for other elements in the waiting room, among them four 800-pound hanging globes, decorated with zodiac symbols. 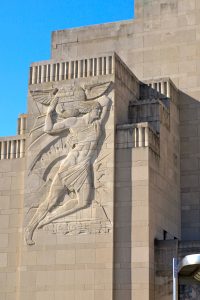 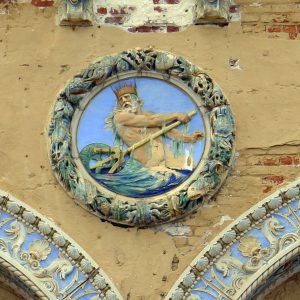 One of Maxfield Keck’s roundels for Childs Restaurant on Coney Island. (Kevin Daley) 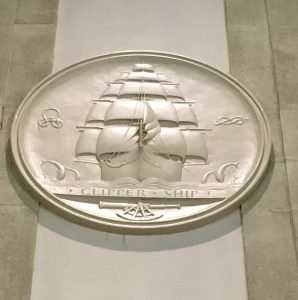 One of 13 medallions designed by Maxfield Keck for Penn Station in Newark.

His contributions to the Washington State Capitol in Olympia (1928) include highly detailed sculptural designs in the bronze doors, and other work in sandstone and limestone throughout the building.  Other projects attributed to Maxfield Keck include the ornately carved pink Tennessee marble entrance door to the former Newark Chamber of Commerce (1922);  two statues at the 1939 New York World’s Fair: a gold-leafed Mercury atop the Bell Telephone exhibition building and a Pegasus on the grounds;  sculptures for the Chase National Bank  and the South Brooklyn Bank in New York;  and exterior details on 550 Seventh Avenue in the garment district of Manhattan.  For the Delaware Trust Building (1930), a Classical Revival building in Wilmington, he acted as a model maker to bring to life the architects’ designs for the ornamental plaster ceiling and bronze medallions on the floor of the main banking hall. For the Art Deco Alfred E. Smith New York State Office Building in Albany (1932), he designed low-relief panels in the belt course depicting themes such as agriculture, transportation and the arts.  He also contributed to the Shelton Towers hotel in Manhattan; post offices in Pittsburgh and Hartford; the Public Safety and Court Building in Milwaukee; and plaques for four public schools in New York City  and a Washington Memorial Plaque (1932) in Kingston, N.Y.

Maxfield Keck died in 1943, at age 62.  Over the decades his contribution to Anderson Park has acquired a soft-green patina. Upon its installation at a ceremony honoring Charles W. Anderson, a local newspaper concluded: “No more fitting memorial to a highly esteemed and public spirited citizen can be imagined.”

Other Plaques in the Park 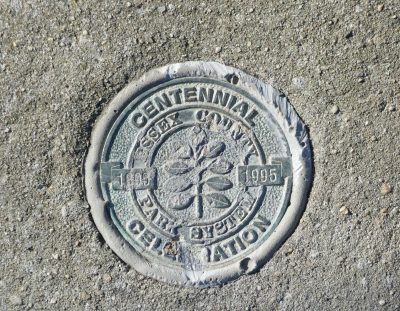 Marking the centennial of the Essex County Park Commission (established in 1895) is a bronze medallion, 3 inches in diameter, decorated with leaves and set atop a 16-inch-high concrete pedestal near the southern end of the park. It is beside a Princeton elm tree, planted in 1996 by the Essex County Parks Centennial Committee, which placed one such tree in 18 parks to commemorate the centennial in 1995. 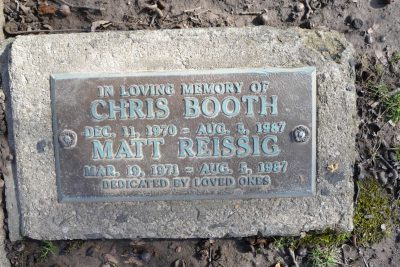 Beside a bench on the eastern side of the park is a memorial to two teenage boys, Chris Booth and Matt Reissig, killed on Aug. 5, 1987 on the train tracks bordering the park. They were struck by a westbound freight train traveling on eastbound tracks around 12:20 a.m. The boys were hit about 200 yards north of the Watchung Avenue train station on a stretch of tracks sometimes used as a  shortcut between the Watching and Upper Montclair areas. Their bodies were discovered the next morning. An investigation concluded that their deaths were accidental. 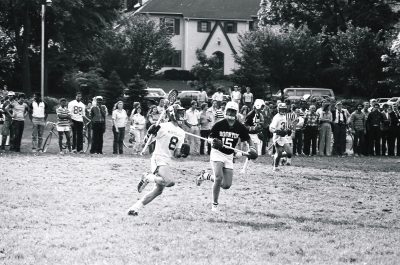 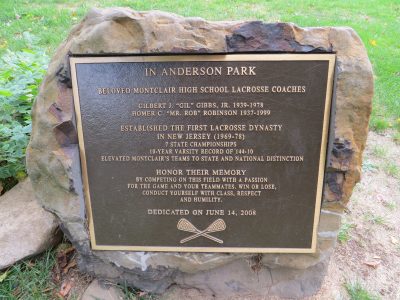 The park’s importance as an athletic field is reflected in a tablet installed on June 14, 2008 to honor the Montclair High School lacrosse coaches Gil Gibbs and Homer Robinson. Considered pioneers of scholastic lacrosse in New Jersey, they created the first high school lacrosse dynasty in the state, capturing seven varsity state championships and eight junior varsity state championships from 1969 to 1978. Their commemorative plaque was placed by Montclair Lacrosse and presented at a dedication ceremony. Since 1981, Anderson Park has been a “sacred battleground” for the Montclair Junior Lacrosse program. Three months after the tablet’s dedication, an October Red Glory maple (Acer rubrum) was planted beside it. (Above, Montclair High lacrosse player Matt Reilly, No. 8, on the Anderson Park field in 1980.) 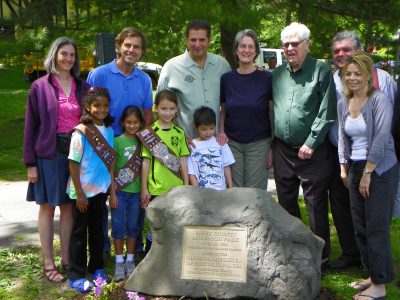 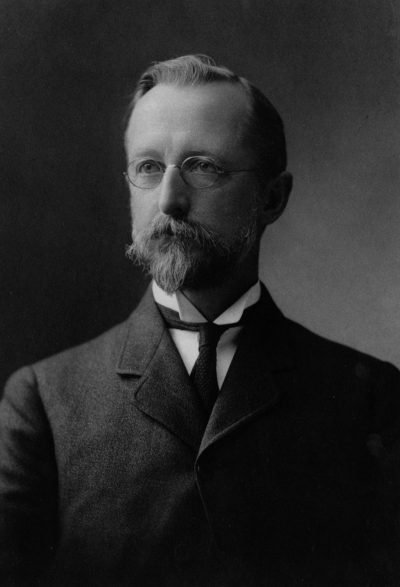 The newest marker notes the park’s placement on the National Register of Historic Places in December 2009. This bronze plaque, mounted on a boulder brought to the site, was dedicated on May 15, 2010 by Essex County officials and Friends of Anderson Park. It is the only marker in the park to acknowledge its designer, John Charles Olmsted (above, in 1907).